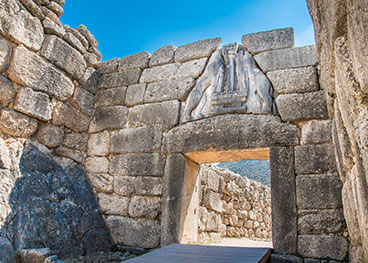 The charming and peaceful land of Argolida holds, within the bowels of its earth, one of the most important civilisations ever to see the light of day: the Mycenaean civilisation. It is difficult today to imagine the excitement of Schliemann and Dörpfeld, who with Homer as their guide, revealed one of the greatest cradles of humankind before the eyes of the whole world. The Mycenaean civilisation held dominion over this land, which was inhabited continuously since the dawn of history, and it became the leading light of the ancient known world.

Following in the footsteps of mythology

Homer and other writers of ancient Greek tragedy committed their names to memories which have passed into the collective unconscious of humanity. Agamemnon and Menelaus, Danaë and Perseus, Pelops and Atreus are the apparent forefathers of all of Europe, and the birthplace of all of these historical figures, is golden Mycenae. The earliest archaeological fragments indicate that the site of Mycenae was inhabited since the 7th millennium BC, from prehistoric times. In a dominant, naturally fortified position between the tranquil sloping hills of Profitis Ilias, and Sara, with a plentiful water supply, it was an ideal place for man to settle and live a protected life.

The apogee of the Mycenaeans, with their majestic architecture, inscribed monuments and sophisticated civilisation, occurred in the Late Bronze Age, between 1350 and 1200 BC. The first hegemonic factions appeared as early as 1700 BC, that is, in an historical period for which is difficult to determine exact details. But around this same period construction began on the first monumental tombs. After this, expansion developed at a dizzying speed. Palatial complexes, Cyclopean masonry which is awe-inspiring even today, the famous "Tomb of Agamemnon” (also known as the "Treasury of Atreus”), huge arches, fountains and ramparts comprise one of the greatest architectural complexes known to the ancient world. The decline of Mycenae occurred around 1100 BC, possibly due to repeated damage from earthquakes and fires. They had managed, however, to have once been a truly great empire, which has indelibly stamped its reputation on the history not only of Greece, but the entire world.

The archaeological site of Mycenae is 140km from Athens and 24km from Nafplio.

Tiryns – a city built by the Cyclopes

The fortification of the hill of Tiryns (8km from Argos) which protects the palace complex, is such an impressive construction that the ancient Greeks could not believe that it was built by human hands. Thus, the architects of Tiryns were said to be the Cyclopes, who came to the city with Proetus, its legendary founder, from distant Lycia. All the great heroes with supernatural powers are associated with Tiryns: Bellerophon, Perseus, and Hercules. Indeed, the construction of the wall is unbelievable and a challenge to logic, even for today’s visitors. One stands in awe in front of the perfect assembly of these huge boulders, unable to understand either how or who could have performed such a great feat of engineering.

From archaeological findings we know that the gently sloping hill of Tiryns was continuously inhabited from Neolithic times to Late Antiquity. It was already flourishing in the Early Bronze Age. Between 2700 and 2200 BC, there was a populous and prosperous city here. The circular building, 27 metres in diameter which dominates the hilltop, bears witness to the undeniable power of the city. The fortifications of Tiryns were completed in stages, to protect the palace complex, their places of worship and burial sites. Warehouses, workshops and houses complete the picture of a city which flourished for almost 2000 years, until the 5th century BC.

Becoming familiar with Mycenaean civilisation involves a descent into the deepest reaches of human history. Looking at Mycenae and Tiryns, one loses all sense of time. Legend and history intertwine in a dreamlike motif. The gods, already memorialized by name in the Mycenaean syllabic inscriptions, seem somehow familiar. The heroes still walk the citadel of Mycenae, guardians of a past gone but not forgotten.