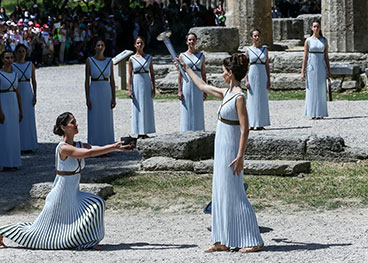 In the western Peloponnese, in the beautiful valley of the Alpheios river, lies the most celebrated sanctuary of ancient Greece. Dedicated to Zeus, the father of the gods, it lies on the southwest foot of Mount Kronios, at the confluence of the Alpheios and the Kladeos rivers, in a lush green landscape. Although secluded near the west coast of the Peloponnese, Olympia became the most important religious and athletic centre in Greece. Its fame rests upon the Olympic Games, the greatest national festival and a highly prestigious one world-wide, which was held every four years to honour Zeus. The origin of the festival goes back centuries. Local myths concerning the famous Pelops, the first ruler of the region, and the river Alpheios, betray the close ties between the sanctuary and both the East and West.

According to UNESCO’s World Heritage website, there is probably no ancient archaeological site anywhere in the world more relevant in today’s world than Olympia. The stadium of Olympia, where the ancient Olympic Games were held, and the massive temple of Zeus, the largest temple in the Peloponnese, are the site’s most significant attractions.

The archaeological site of Olympia includes the sanctuary of Zeus and the various buildings erected around it, such as athletic premises used for the preparation and celebration of the Olympic Games, administrative buildings as well as other buildings and monuments. The Altis, the sacred enclosure and core of the sanctuary, with its temples, cult buildings and treasuries, occupies the centre of the site. It is surrounded by a peribolos, or enclosure wall, which in the late fourth century BC had three gates on its west side and two on the south, and is bordered on the east by the Echo Stoa, which separates the sacred precinct from the stadium. The enclosure wall was extended in Roman times and two monumental entrances were created on its west side. 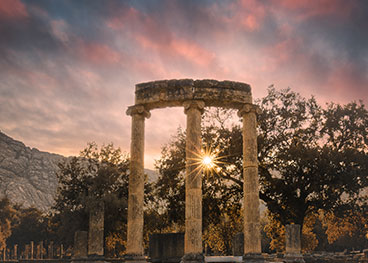 The Classical Temple of Zeus and the earlier Temple of Hera dominate the Altis. East of the Heraion is the Metroon, a temple dedicated to the mother of the gods, Cybele, and behind it, on the foot of Mount Kronios, a row of treasures that were offered by Greek cities and colonies. To their west lies the Nymphaion, a fountain dedicated by Herodes Atticus. South of the Heraion and over the remains of the prehistoric settlement of Olympia is the Pelopion, a funerary monument commemorating the hero Pelops. Within the Altis are the Prytaneion, the see of the sanctuary officials, and the Philippeion, an elegant circular building dedicated by Philip II, king of Macedon. Southeast of the Heraion was the great altar of Zeus, a most important monument entirely made of ashes and therefore now completely lost. The remaining space inside the Altis was filled with numerous altars and statues of gods, heroes and Olympic winners dedicated by Greek cities or wealthy individuals, such as the Nike of Paionios.

Outside the sacred precinct of the Altis, to its south, are the Bouleutherion and the South Stoa, the southernmost building of the greater sanctuary and its main entrance from the south. West of the Altis and separated from it by the Sacred Road is a series of buildings for the sanctuary personnel, the athletes and the distinguished visitors: the gymnasium and palaestra, exercise grounds, the Workshop of Pheidias, which in Late Antiquity was transformed into a Christian church, the Greek baths with their swimming pool, the Roman hot baths, the Theokoleion or priests' residence, the Leonidaion or officials' quarters, and the Roman hostels

East of the Altis lies the stadium where the Olympic Games were held. South of the stadium was the hippodrome, of which no trace remains as it was swept away by the Alpheios river. South of the hippodrome is a group of mansions and baths, including the famous House of Nero, built by the emperor for his stay at Olympia during his participation in the games.